Mindful Movement and Deep Breathing As a Self-Care Tool, Part 6

These notes are intended as additional resources for my brief presentation on October 21, 2014, for Introduction to Lifestyle Medicine, which is a Psychology Extension course at Harvard University. This is based on my personal notes while preparing for the research and the published research findings. 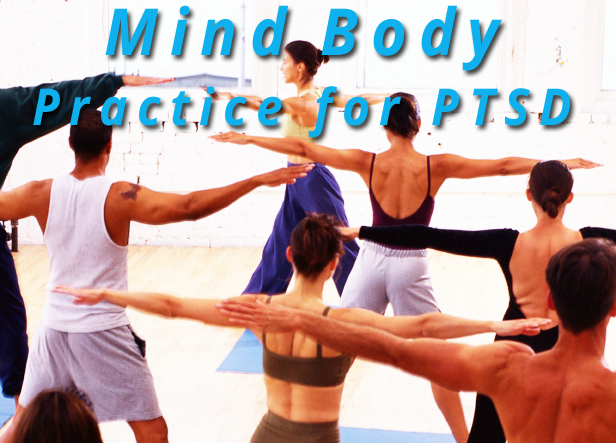 So we got the federal fund for the research, organized  a team, registered for the ClinicalTrials.gov, and was ready to go.

The official title became “The Efficacy of Mindfulness-Based Stretching and Breathing Exercise as a Complementary Therapy for Posttraumatic Stress Disorder: A Randomized Study,” in short, “Efficacy Study of MBX for PTSD.

Our study explored the relationship between changes in plasma cortisol and symptom reduction resulting from individuals with PTSD participating in an 8-week program of mindfulness-based stretching and breathing exercise (MBX). We hypothesized that at the completion of participation in the 8-week program, exercise-induced symptom reduction would be associated with changes in cortisol levels.

The study employed an intent-to-treat design to evaluate the relationship between exercise-induced PTSD symptom reduction and exercise-induced changes in cortisol level. The participants consisted of nurses and the intervention was conducted at the Clinical and Translational Science Center of the University of New Mexico Health Science Center. The study was approved by the Human Research Protections Office of the university. Nurses who were screened positively for PTSD were randomly assigned to either control or exercise group. At baseline and in weeks 4, 8, 12 and 16, immediately after the phlebotomy for serum cortisol, the investigators asked the participants to rate the severity of their PTSD symptoms using the PTSD Checklist (PCL).

Exclusion Criteria: 1) the inability to complete the exercise program, 2) a positive answer to any of the seven screening questions on the Physical Activity Readiness Questionnaire (PAR-Q), 3) current use of prednisone or other forms of cortisone medication excluding cortisone in inhaled form.

Of 63 nurses screened, 29 met the inclusion criteria. Of those, 22 were found to be PTSD symptomatic and were randomized into MBX or CON groups; 7 were assigned to the non-PTSD BASE group. Twenty eight participants completed the study; 1 CON group member withdrew due to family problems.

There was no significant difference in age, ethnicity, education, marital status, smoking status, or nursing experience between the MBX and CON groups.

Participants who were assigned to MBX group attended the series of 16 standardized, semiweekly 60-minute mindfulness-based exercise sessions. The intervention consists of stretching and balancing movements combined with breathing and a focus on mindfulness.Over the course of 8 weeks, the intensity of the exercise increases, but the sequence of the movements is the same.

Participants who were assigned to CON or BASE group did not participate in the mindfulness-based exercise during the course of 8 week. However, they received the series of 16 standardized, semiweekly 60-minute MBX training sessions after the active treatment group between the 9th and 16th week.

PCL Scores: The PCL-C is a 17-item self-report instrument that measures the symptoms of PTSD. A total score, ranging from 17 to 85, is found by summing the scores of the 17 items. Higher values are considered to be a worse outcome. The  instrument has been previously validated in individuals with PTSD, and it showed good test–retest reliability and internal consistency. To detect a reduction in PTSD symptom severity with a 2-sided 5% significance level and a power of 80%, the mean difference of PCL-C scores of 5.16 or greater required a sample size of 20 participants for Exercise and Control groups, given an anticipated dropout rate of 10%.

Stress Hormones: Samples of serum cortisol, a primary stress hormone of our interest in the study, were collected at 8:00 Ante Meridian (AM) after morning phlebotomy at baseline and weeks 4 and 8 for all groups. For the MBX group, serum cortisol was also measured at week 16. Serum cortisol was analyzed using the ADVIA Centaur XP Immunoassay System (Bayer HealthCare, Tarrytown, New York) at TriCore Reference Laboratories (Albuquerque, New Mexico).

We also obtained adrenocorticotropic hormone (ACTH) and dehydroepiandrosterone sulfate (DHEAS) to explore the relationships between the differences in the ratio of those hormones and changes in PTSD symptoms (for details, read Part 7 on the effects of mindful movement on the hypothalamic neuroendocrine regulation). Plasma ACTH and serum DHEAS were measured after morning phlebotomy at baseline and postintervention and were analyzed using the Immulite 2000 Immunoassay System (Siemens, Erlangen, Germany). The changes were calculated from two time points as the values at 8 weeks minus the values at baseline.

To be continued in Part 7.