This is Part 4 of 4-Part series about how to overcome common barriers to productivity and reignite your inner fire. This part takes you to the behind-the-scene of our motivational acts, zooming into the work of the major brain chemicals and brain regions that are involved in motivation. Looking for the other parts? PART 1 | PART 2 | PART 3

Motivation is the mental state that arouses you to take action toward your goal. It gives you a sense of purpose and directs your behavior. The more motivated you are, the more you are likely to adapt your unique nature in your given environment and find ways to obtain your goal.

Although your innate traits are important, nurturing self-motivating habits plays a crucial role. Highly motivated behavior stimulates the neural networks involved in motivation and affects how we feel about ourselves and how we think.

Many aspects of motivation are emotional and cognitive. When we feel positive and make sense of our actions, our brain functions well and we become motivated to excel. We don’t clearly know which one comes first: we feel good and so perform well or we perform well and so we feel good.

We do know, however, that brain chemicals play a central role in boosting our motivation and performance. The two key players are dopamine and serotonin, chemicals called neurotransmitters in the brain.

Also important are the brain networks responsible for regulating our motivational behaviors. They are the ventral tegmental area (VTA) for motivation and reward processing, the substantia nigra (SN) for emotional regulation, the striatum for risk-reward processing, the nucleus accumbens for reinforcement, the hippocampus for memory and navigation, and the frontal cortex for executive functions.

These brain networks have evolved to stimulate the innate reward systems in our body to ensure our mental and physical fitness for survival.

Dopamine boosts motivation. It also regulates movement, reward, and pleasure. Our dopamine level increases as we anticipate an immediate pleasurable reward, and as we get the reward, it reinforces our behavior to repeatedly to obtain the reward. 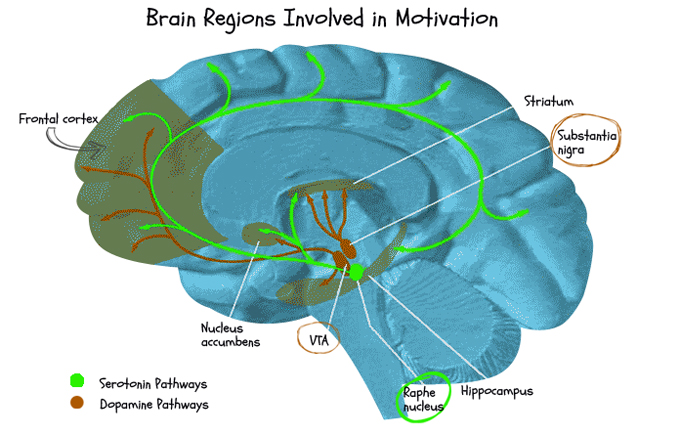 Dopamine is produced primarily in two sites in the brain: the substantia nigra (SN) and the ventral tegmental area (VTA). The neurons from the SN rise to the striatum which adjusts motivational levels by inhibiting our behaviors. The VTA neurons project to the frontal cortex and are involved in generating rewarding and motivated feeling.

Reward, novelty, and aversion are potent stimulants of the SN and VTA dopamine pathways, which in turn affect our executive functions such as  thinking, planning, organizing, strategizing, and  remembering details. That’s why when you are highly motivated, you think clearly about your plan and put your strategy in action.

Serotonin modifies behavior. One way of doing it is through inhibition, through the frontal cortex, of our thoughts and impulses. Another way is through interpreting, through the hippocampus, what we see, hear, smell, touch, and taste as being harmful or beneficial. Based on our interpretation of what we experience, we make judgement calls and modify our behavior. With optimal levels of serotonin, we are more likely to better control ourselves and to be in better mood and motivated.

What Triggers The Brain Chemicals

Reward is the most powerful motivator. Whether a reward is intrinsic or extrinsic, anticipating a pleasurable positive experience is exciting and attractive. Positive anticipation floods the brain with happy chemicals and propels you to move toward the reward. The brain starts running at full throttle to map out the course to the rewards.

Anticipation of a pleasurable positive experience is the key in arousing excitement and motivating yourself. Suddenly, you become a goal-directed person. Like a sprinter who is going to dash through the 100m track, you are pumped up, with more oxygen filling in the lungs and blood rushing into the muscles. You are ready to be unleashed. Highly motivated, you feel your brain mapping out steps to the destination. You are positive about your success. A a result, serotonin and dopamine levels increase in your brain.

The Reward Brain: Anticipation of reward sparks secretion of dopamine in the mid brain. Specifically,  in the VTA. Dopamine, manufactured in nerve cell bodies in the VTA, is released in the nucleus accumbens and the prefrontal cortex increasing memory, learning, motivation, and a sense of reward. It’s not surprising that the VTA dopamine pathway influences learning because it is linked to the hippocampus, the brain’s learning center. Learning about the relationships between motivation and rewards is critical in reinforcement of positive behaviors. This way, motivation can be learned. The more positive reinforcement you experience, the more you are likely to repeat the learned behavior to obtain the rewards.

At the back of your brain, however, a different thought rises. “Reality is risky and uncertain. It’s going to be very stressful exploring an uncertain and risky path with scant resources. I need stronger assurances to be sure this is a worthwhile risk.” Unless you make up something powerful enough to negate those negative thoughts, you are going to be unable to take action. Adversity and uncertainty are roadblocks. You are uncertain about your success.

The Risk Brain: What drives our motivation in uncertain risky environment is linked with the striatum located in the middle of the brain. Dopamine produced in the SN projects to the striatum which provokes anticipation of reward, risk-taking and novelty- seeking behaviors and motor functions. Anticipation of potential reward or risky decision-making activates the neural responses of the striatum. When your decision is too risky, the frontal cortex steps in moderating your overactive risk-taking behaviors and promoting less risky goal-oriented decision-making.

The serotonin pathways are key player in executive control of our brain. They are functionally connected with the entire cortex and hippocampus influencing cognitive 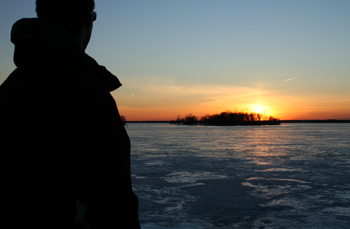 function, memory, attention, learning, and behavioral inhibition. As serotonin increases in the brain, we have better memory, greater attention, and better control over inhibition of behavior when we anticipate aversive outcomes. We also learn more efficiently, feel motivated, and become stress resilient.

Serotonin is also linked with the level of effort we make based on our perception of resource availability. If we perceive scarcity or abundance of resources, we make more or less effort, affecting the level of our motivation.

One thought on “Brain Science of Motivation”