This series will present three types of Power Breathing methods: Gentle Breathing, Staccato Breathing, and Explosive Breathing. Each method focuses on drawing air into a specific area of the abdomen at a different intensity level.

This is the second part of a 4-part series on Power Breathing Series. Read Part 1

Power Breathing can be as strenuous or gentle as you choose. You can begin with a very gentle practice described here or jump straight to the more strenuous methods of staccato and explosive breathing. The differing intensity levels serve different functions engendering different feelings and energy levels.

Gentle breathing is the foundation for all Power Breathing methods. It consists of 3 steps: inhalation, condensing, and exhalation.

Begin in the position of your choice – sitting, standing, or lying.

As you move the belly out and begin to breathe in through your nose, the diaphragm extends downward letting more air fill the lungs.

Further diaphragm strengthening occurs during the exhalation stage when you consciously let go the diaphragm while slowly controlling the belly muscles with pressure. Imagine you are slowly releasing the string of a bow.

During the 6 second exhalation phase, you not only expel waste products out of the body through the breath, you supply more oxygen to the brain, organs and muscles. Slow exhalation also calms the nerves in the body. As a result, you feel relaxed and recharged.

In controlling the diaphragm muscle, initially you may feel awkward. If it feels unnatural, try one breath then take a break. Then try again with two consecutive breaths and take a break and so on. 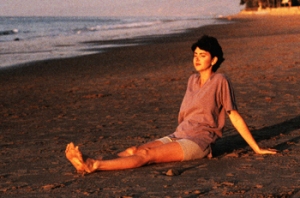 Through practice, you will develop your own breathing pattern that fits the natural internal rhythm of your body. You will be able to breathe more deeply and fully.

… to be continued in PART 3